The 1st BIMA Conference: A Review by Niteco

Niteco is a member of the British Interactive Media Association (BIMA), and as such we attended their inaugural annual conference. Here, Niteco’s Mark Welland gives a detailed account of the event…

A sunny autumn day in London saw several hundred delegates convene for the inaugural BIMA conference hosted at the Institute of Engineering and Technology on the banks of the River Thames. Established in 1985, BIMA (or The British Interactive Media Association) is an organisation which represents the interactive media and digital content sector in the UK. Their mission is to drive innovation and excellence across the digital industry, hence why we’re members. Titled ‘Lessons From The Future’, the conference featured speakers from some of the industry heavyweights such as Microsoft, Amazon, IBM, Slack as well as charities, agencies and entrepreneurs.

Cindy Rose, CEO of Microsoft UK kicked off the keynote speakers for the day. In her presentation of ‘Rules for the New World’ she talked candidly about the rise and fall and rise again of the company. Quoting Bill Gates, “Success is a lousy teacher; it seduces smart people into thinking they can’t lose.” Cindy explained that Microsoft have learnt first-hand the challenges that success brings. It was Satya Nadella taking over the reins as CEO of Microsoft in 2014 that reversed their fortunes for the better and changed the company from the top down. With technical evolution, artificial intelligence (AI), machine learning, this creates new opportunities. Martech, in particular, sees a 15.6% year-on-year growth (compared to 4.1% from traditional marketing methods). By 2022 Gartner predicts that content creators will generate 30% of their content via AI. This contributes to a skills gap and Microsoft has set targets to address this including a free digital literacy programme for all in the UK. Everything at Microsft now is underpinned with a strong Diversity & Inclusion (DNI) focus. DNI is intrinsic to every approach, every idea, every solution. Finally, Cindy spoke of the need to establish strong partnerships to deliver the best solutions for clients who demand performance and value. Niteco is proud to be a Microsoft partner and we continue to leverage the best of their technology for the benefit of customers and end users.

Richard Nockles, Founder of Surround Vision & Creative Director, Sky VR spoke on the topic of AR, VR and The Content Of The Future. Richard produces immersive content using 360º cameras. He spoke about using augmented reality and virtual reality to create rich content with impact & reach, as well as some of the future trends in that space.

Journalists and authors, Paul Mason and Jamie Bartlett brought us back down to earth with their fireside chat on Tech, Democracy, And The Battle For Humanity. Paul cautioned us on the need for governance and regulation around AI. As artificial intelligence creates complex layered structures of learning, humans lose the ability to be able to observe and keep pace with it. Robust regulation is needed to protect us from the trust that we place in the machine’s decision making.

Rocket scientist and aerospace engineer, Dr. Anita Sengupta was part of the team at NASA that landed the Curiosity Rover on Mars, but is now in the private sector as VP Engineering Systems at Virgin Hyperloop and co-founder & CPO of Airspace Experience Technologies. She talked about her latest venture revolutionising Urban Air Mobility which is predicted to become a trillion-dollar industry within the next two decades.

Head of Slack in the UK, Stuart Templeton’s keynote talked about Organisational Agility. He referenced how Slack was an accidental creation from Stewart Butterfield's company Tiny Speck during the development of an online game Glitch. It emerged as a result of their distributed teams who grew frustrated by email as a means of communication. Slack now boasts more than 10 million daily active users across more than 600,000 organizations (including Niteco). Stuart explained how human work is more complex than ever and this requires cross-functional collaboration. Most large companies use over 1000 tools/applications. In order to solve complex problems, you need to mobilise a distributed network of people, data and software. Aligning workers to both team and strategy brings success, something very close to the heart of how we operate at Niteco.

Climate change might seem like an unusual topic to discuss at a digital technology conference but in the UK, Europe and the Western world in general, the climate crisis is rightly top of the agenda. The youth movement, driven by 16-year old Greta Thunberg has raised global awareness of the risks posed by climate change. Here we heard four very passionate speeches from Chris Gorell Barnes, Founder Of Adjust Your Set, And Co-founder Of Blue Marine Foundation; Will Skeaping from Extinction Rebellion; Dan Burgess, Founder Of The Spaceship Earth And Co-founder Of Good For Nothing; Gail Gallie, Co-founder Of Project Everyone on the topic of Climate Crisis: Can Digital Save The World? Sobering words that not only cemented what we can do as individuals to protect the world for our children and grandchildren but demonstrated the role that technology has to play to avert catastrophe by reducing carbon, changing minds and influencing the world to protect our planet. Because there is no Planet B. This theme ran throughout all of the talks of the day, reducing carbon, sustainability is of paramount importance to all successful, responsible technology companies.

The afternoon saw a series of parallel Masterclasses and Immersive Showcases. Demonstrating the capability of technology to do good, Haiyan Zhang, Senior Director of Innovation at Microsoft Research; Krissie Barrick, Head Of Digital Influencing at Scope talked about Innovation at the Fringes. How technological innovation is able to help people left behind by the mainstream. Haiyan spoke about some of the incredible projects she has led to help people offset the effects of Parkinson’s disease, to turning breathing exercises for children with cystic fibrosis into a video game. Krissie spoke about accessibility and being inclusive by design. Over one billion people (15% of the world’s population) experience some form of disability, yet when we consider design and UX/UI, we often lack that consideration and understanding.

Ankit Chhajer, in his role of Artificial Intelligence Cora Lead at NatWest/RBS bank, talked about using human-focused AI to transform banking. Cora is a chatbot. Released within 3-months in 2017, Cora is designed to allow conversational banking using AI and machine learning and she continues to evolve. Trained with over 200 customer intents she has over 1000 responses. So far in 2019 alone, she has had over 5million conversations. By 2025, the target for Cora is to be the first point of contact for all of the bank's customers across all channels.

Debbie Vavangas, IX Industrial Sector Lead at IBM IX continued on the theme of AI and machine learning as she spoke about the application of the technology in sport. By 2025 there will be a predicted $3 billion spend in IT tech for sports. Showcasing the work IBM has done with the Wimbledon tennis tournament. Creating the daily highlights package used to take almost a whole day of manual editing, using IBM Watson and AI they can create the highlights in less than 2 minutes. AI listens to sounds of the ball, it can read the audiences facial expressions and emotions, it can decipher a tennis player fist-pumping after they have one a point, analysing 63 million data points. Within 20 minutes of playing a match, the players have a detailed, analytical performance of their match, how they won or lost the game. She talked about the challenges of scalability, for a club with 375 members, Wimbledon has to reach a digital audience of 200 million for a 14-day period using cloud technology to scale up by 55,000%. Cybersecurity is a significant concern, in 2018 IBM Watson identified and blocked over 200 million security events during the 2-week tournament.

Max Amordeluso, Lead Evangelist for Amazon Alexa in Europe highlighted the growth and the potential for voice recognition. From its release in November 2014, there are now over 100 million Alexa enabled devices, 60,000+ smart home products that can be controlled by Alexa and over 90,000 Alexa Skills, it has changed the way we interact with technology. Max spoke of the human connection of voice as the purest manner of communication, there is no requirement to develop skills to use the technology beyond talking. He demonstrated how Alexa can enhance experiences for the old and the young. Technology for the good.

Closing the conference was Nell Watson, Futurist And Tech Philosopher. She talked about a broad spectrum of time, how we and our civilisations have evolved and how our behaviours and our technology can shape our future. Economic, social and political factors that make up the fabric of our society. From trust to machine ethics and our quest to ‘make sense of the chaos and automate the ineffable’. Concluding with the positive impact technology has on our society, tackling climate change through the ability to understand and measure more about our planet now than ever before. We have experienced key tipping points throughout time. The industrial revolution sparked demographic change and industrial advancement, more recently an informational and technological revolution. Nell speaks of the third era of change approaching driven by machine intelligence, economics and ethics. Who knows quite where that will take us next? 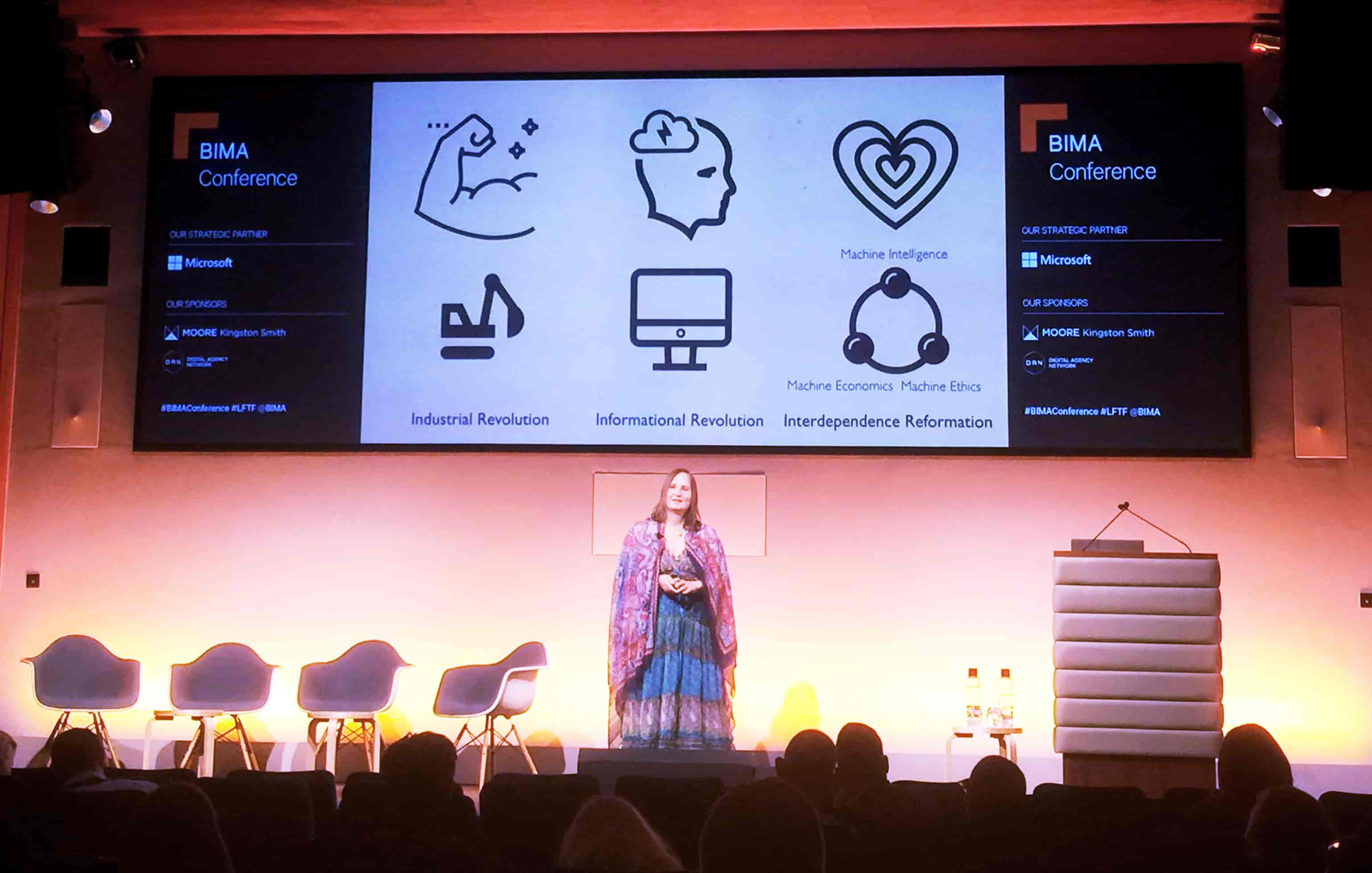 An inspiring and insightful conference. My takeaways from the day were:
● AI & machine learning has the potential to radically change our future for the better but it has to be closely regulated with codes of ethics and governance.
● The differentiation between humans and machines will become ever smaller as technology interweaves deeper and deeper into our lives. From smarter chatbots, virtual reality, autonomous vehicles and voice-user interfaces (VUI).
● Diversity and inclusion should always be centric to everything we do, every decision we make, every action we take.
● Technological advancement will invariably change our civilisation. As it does so we must rise to the demands of an ever-growing population. In doing that, we must take responsibility and stop screwing up our planet along the way. There really is no planet B.
● My belief that technology is a powerful enabler for the good has been reaffirmed.

Did you attend the conference? What were your takeaways?

Mark is a pragmatic project and operational specialist with 15+ years experience of delivery and digital transformation through people, process and technology. He heads up the UK office with UK, Ireland and North America oversight.

A global network of Skills: The benefits of working with Distributed Teams

The COVID-19 pandemic has shown people around the world that the location where we do our work isn’t that important. What’s important is the resources and skills we can combine to tackle a project. Niteco’s Mark Welland tells you what to do if those resources happen to be distributed across the world.

5 common CMS and E-Commerce pitfalls you should avoid

Niteco knows the pitfalls that can make a CMS and E-Commerce project fail before its time. To ensure a successful site, follow these tips by Episerver MVP Nicola Ayan.